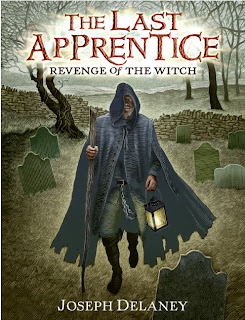 This review will look at The Last Apprentice, the first of a dozen books in Joseph Delaney's The Wardstone Chronicles.  The Last Apprentice won New York Public Library's "One Hundred Titles for Reading and Sharing" as well as the ALA Best of the Best Books for Young Adults. A movie based loosely on the series will soon arrive on the big screen as Seventh Son.

Tom Ward is the seventh son of a seventh son. That's an interesting lineage, sure, but who really cares? John Gregory, for one. He is a Spook, the last line of defense between the forces of evil and the rest of a blissfully unaware world. John's not getting any younger, and he needs an apprentice - namely, Tom, who has arrived after just the right amount of sevens.

You can read the plot elsewhere. I'd rather focus on the messages within the story.

It's tough to be a Spook. Everyone is afraid of you; you are in constant danger; you have to actively search for evil while knowing it is also stalking you. Yet... you do get to save the world. As Tom notes, "I was going to learn how to protect farms and villages from things that go bump in the night. Dealing with ghouls, boggarts and all manner of wicked beasties would be all in a day's work."

If it were only that simple. When Tom leaves with John, the Spook immediately throws him at the mercy of things that go bump in the night. It's just a test, but it's an important one:

"There's just you, me, and the dark. Can you stand it? Are you fit to be my apprentice?"

He is fit to be one, actually, at least as much as is possible. His father taught him right from wrong. His family prays together. He's always been sensitive to the supernatural world around him. He's kind, generous, and responsible. He comes from good heroic stock.

Even his mom's mysterious background might be to his advantage. She's subtly adept in the supernatural world for reasons that unclear, but two things about her are obvious: she's made of more than meets the eye, and she really, really wants Tom to be the next Spook. She actually sought out a seventh son and married him so she could have a seventh son. That's an almost disturbing level of commitment. When Tom returns home after being on the front lines for a while and tells his mom he is considering quitting, she lets him have it:

"You have a job to do and you're going to do it. And not only do it; you're going to do it well... If you won't do it, who will? Who'll look after the ordinary folk? Who'll keep the from harm? Who'll make the farms, villages, and towns safe so that women and children can walk the streets and lanes free from fear?... Someone has to do it. Someone has to stand against the dark. And you're the only one who can."

He stands, of course. He was born for this. There is no question that he has a purpose, and his life is meant to make a difference. The kind of heroism necessary for a job like that cannot be easily acquired, however.  Those who want to stand must learn how to fight, and both learning and fighting can be dangerous things.

With all John's talk about ley lines, possession, witches, ghouls, boggarts, ghosts and ghasts, Tom thinks heroic stands will involve cool magical battles. That isn't the case at all. The wards of the good can't fight evil with evil. They can't fight witches with witchcraft of horrific tactics. The best weapons at their disposal are knowledge and character.

"We don't use magic, lad. The main tools or our trade are common sense, courage, and the keeping of accurate records, so we can learn from the past... If [something] comes true, then it's because we make it come true." 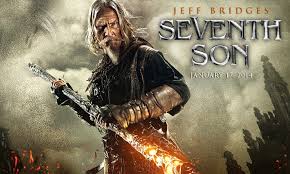 Being the seventh son of a seventh son, Tom thinks he will be ready quickly. He isn't. For example, the Spook tells him that in the midst of chaotic situations he must learn to "trust the voice inside you. It's rarely wrong."  When Tom follows his advice, everything goes horribly awry. John grumpily admits, "So that's another thing we need to find out about you. Whether or not your instincts can be relied on." Yeah, that would be good to know. Being born for battle and being ready for it are two very different things.

In a culture that tells youth to do what feels good and to follow their heart, it's worth having a story that offers a counter: do what is good, and don't assume that every instinct you have is reliable. Tom may be born for greatness, but he still needs people to help him gain wisdom and live well.

Tom thinks the conflict will be clear: the enemy will be completely, unambiguously evil. Then he meets Alice, who was born very bad but desperately wants to change. Tom's mom says Alice was born with a witch's heart that will lead her down her fated path. The Spook claims it could go either way with her: Alice could become an amazing force for good, or she could go bad. Very bad.

Can people overcome their past? Can identity be reduced to biology, family and fate? Do we ultimately have the freedom to choose even if the odds are never in our favor?  If you feel like you've been hearing these themes lately, you have. Some of the most popular YA literature wrestles with provocative questions such as these.

Both the Spook and Tom's mom think he should get rid of Alice. Tom eventually goes with the increasingly mature voice inside and decides not to reject her. After all, Alice's dilemma is a universal one. We are all born into war within; we all struggle to live well; we all can still choose to forget what lies behind us and press on. In the world of Seventh Son, heroes might not be perfect, but they do risk their own safety for the sake of a life that can yet be redeemed.

The series apparently gets much bleaker as it unfolds. An excellent author interview at  The Gothic Imagination notes that "the books have clearly developed in terms of their complexity. They have certainly become darker, bleaker, murkier. It seems as though The Wardstone Chronicles imagine an audience who are growing up, becoming mature – perhaps even becoming more cynical." Delaney himself comments that, as the series unfolds, "Tom has evolved and changed. He’s not going to be the nice lad he once was.”

Since I haven't read that far in the series, I hesitate to comment on that change. Nonetheless, if Seventh Son can capture the tone of The Last Apprentice, it could be a compelling story of the bravery, character and commitment needed to fight the evil around and within us.