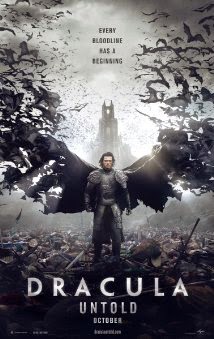 Fortunately, he knows where to get that kind of power. An ancient magician, a Master Vampire, lurks in a cave in the mountains. Vlad could get his power, but it may turn him from being a Child of the Dragon to becoming a Child of the Devil. He loves his wife, his son and his people; it’s a risk he is willing to take. He bargains with the vampire for a three-day test run of vampiric awesomeness. The catch (because there always is one) is that if he drinks human blood during those three days, he frees the vampire from his cave of imprisonment and sentences himself to an eternal, earth-bound service to that vampire.

Dracula Untold traffics heavily in religious imagery. It’s Easter, the celebration of Christ’s Resurrection to life, when Vlad first gives himself to the death offered by the vampire. He dies briefly, then has three days to save himself from the curse. Christ was mocked for being able to save others but not himself; Vlad discovers he can save himself, but not others. The local priest has a cross from which all vampires cringe. This version of the story at least attempts to take good and evil seriously, and acknowledges the Christian roots that threaten the creatures of the darkness with light.

Vlad is in some ways a prime candidate for the allure of evil. As an adult, he seems strangely unruffled by his past atrocities. Sure, he did horrible things, but he defends it as being for the greater good (the other cities that might have been slaughtered in the Turkish conquest surrender peacefully). When the Master Vampire slaughters several of his men in front of his eyes, he is unmoved. If anything, he is glad he found out what was lurking in that cave. The lives of a couple men are a fair price to pay for the greater good. He tells a friend that it won’t be good enough just to fight well; the invading army will fear a monster more than a sword. He is perfectly willing to be that monster because it will save his wife and his son. Ah, the greater good. It’s a Siren song that is hard to ignore, especially when your conscience is silent.

At first, it seems that his plan might work. He avoids his cravings for blood - until the end of the third day, when his son is kidnapped and his wife lies dying in his arms. With her dying breath, she begs him…

Here’s where the film lost me. Up until that point, it was shaping up to be a surprisingly decent morality tale. Vlad’s vampiric power was effective, sure, but it was terrifying to those around him, even his wife and son. Everybody knew he had bargained his soul away. I expected at this point for his wife to beg him not to give in, to let the curse lift and try to save their son as Vlad the man, not Vlad the vampire. I expected him to ignore her advice and, in the face of all the is good and noble in the world, embrace the darkness for revenge and power.

That would have made too much sense. She begs him to feed on her before she dies. He does, embracing the curse forever and setting the ancient vampire free from the confines of his cave. Then he goes back into his recently pillaged fortress and, in a dark turn on the Christian practice of Communion, offers his spilled blood for everyone who wants to become a vampire and get their revenge. They all accept.

Vlad attempts to set things right at the end of the movie when he gives his rescued son to a Monk before exposing his newly minted army on darkness to the sun. It’s a noble attempt at self-immolation (if that type of act can be noble), but it backfires when a terribly misguided soul saves him. Vlad does not try to set things right again (cue the sequel).

I like stories that look to create depth and add nuance to characters, especially ones where the villains are typically portrayed as unremittingly evil. That's too simplistic. There is a story behind the evil we do and the evil we become. It’s worth wrestling with what might push us to embrace that side of our nature. For that reason, I liked most of the movie. But if you are going to wrestle genuinely with the deeds of darkness and light, it’s also worth being honest about how evil leaves it mark in us and around us.

The evil in Dracula Untold recovers enough to become beautiful, seductive, alluring, and even sympathetic. Sure, that’s how evil often looks in the beginning, but the longer we experience it the more we see it for what it is: horrible and broken, leading us to death instead of life. Vlad carries the legacy with him wherever he goes. Maybe this attempt at humanization was untold because there is no explanation that can justify what he has become. Sometimes, bad guys are bad. As Tom Glasson noted at Concrete Playground:

"Here’s the critical thing: a guy whose nickname includes the words “the Impaler” is not a nice guy. He’s an impaler. He impales people. Yet Dracula Untold sets out with the task of humanising a monster for the purposes of... what, exactly? There isn’t an ‘evil bias’ that needs to be redressed for the sake of balance. Nobody's crying out for Pol Pot to get a heartwarming movie of the week to ensure ‘his side of the story’ is told. Some people are simply savage wretches and wretches they will remain."

The last scene portrays him as a suave, gentle man enraptured with women who look like his dead wife. In reality, he’s a vampire, a creature of the night who craves human blood and stalks women who remind him of his greatest failure.

That's not a story that's been tragically misunderstood; that's a tragedy begging for redemption.
Posted by Anthony at 7:00 PM