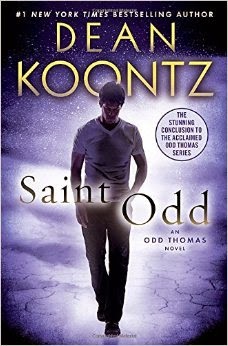 2) Odd's anger at evil is righteous. If there is a just use of violence, Odd embodies it. Koontz makes it clear that Odd is not simply some crusading do-gooder. He's the guy standing in the gap between order and chaos. This (long) quote captures the nature of evil as we have seen it time and again throughout the series:

Our world was a battleground on which good and evil clashed, and many of the combatants on the dark side were known to everyone. Terrorists, dictators, politicians who were merchants of lies and hate, crooked businessmen in league with them, power-mad bureaucrats, corrupted policemen, embezzlers, street thugs, rapists, and their ilk waged part of the war, and their actions were what made the evening news so colorful and depressing. But those fighting in that dark army had their secret schemes, too, intentions and desires and goals that would make their public villainy seem almost innocent by comparison. They were assisted by other politicians who concealed their hatred and envy, by judges who secretly had no respect for the law, by clergymen who in private worshipped nothing but money or the tender bodies of children, by celebrities who trumpeted their concern for the common man while in their off-screen lives assiduously hobnobbing with and advancing the interests of the elite of elites.…

The war unseen by most people was one of clandestine militias, unincorporated businesses, unchartered organizations, philosophical movements that could not survive fresh air and sunlight, secretive coalitions of lunatics who didn’t recognize their own lunacy, nature cults and science cults and religious cults. And, as I knew too well, there was supernatural evil participating in this secret war against order, good, and innocence; however, the supernatural was only one regiment of that army and, you might be surprised to hear, numbered far fewer troops than the flesh-and-blood human beings who fought in the countless other battalions.


Koontz noted in an interview, "I don’t shy away from having violent things happen, but I don’t dwell on it. I feel, as a Christian, writing books that have a moral purpose to them, it’s actually incumbent upon me to write about evil, because this kingdom is Satan’s and he is the prince of the world. It’s here and it’s among us. My villains are pathetic. I never glorify a villain. I couldn’t write something like Hannibal because there’s something there that makes the villain the most glamorous person in the piece. I can’t write that. I don’t find evil glamorous. You’ll never find it that way in my books."

3) Odd sees the good in the midst of all the evil. Even as I write that sentence, it strikes me that this kind of perspective is truly odd in a world that seems increasingly jaded and cynical. When Odd looks back on his life, he views it through a much broader lense:


When I was no longer of the world, I would miss its extravagant beauty. I would miss the complex and charming layers of subterfuge by which the truth of the world’s mysteries were withheld from us even as we were tantalized and enchanted by them. I would miss the kindness of good people who were compassionate when so many were pitiless , who made their way through so much corruption without being corrupted themselves, who eschewed envy in a world of envy, who eschewed greed in a world of greed, who valued truth and could not be drowned in a sea of lies, for they shone and, by the light they cast, they had warmed me all my life. I would not miss the indifference in the face of suffering, the hatred, the violence, the cruelty, the lust for power that so many people brought to the pageant of humanity.

4) Odd sees the world as full of wonder. Koontz writes in Saint Odd, ”The source of magic in this world is more mysterious than all the explanations that sorcerers and wizards have given for it, and it is more prevalent than can be understood by those who live according to the constricted form of reason so prevalent in our time.” This reflects his view of life as well. He told the National Catholic Register:


Catholicism permits a view of life that sees mystery and wonder in all things... As a Catholic, I saw the world as being more mysterious, more organic and less mechanical than it had seemed to me previously, and I had a more direct connection with God… I can walk in the rose garden, watch the joyful capering of my dog and see the indisputable work of God. The key is beauty. If the world is merely a complex and efficient machine, beauty is not required. Beauty is in fact superfluous. Therefore beauty is a gift to us. If we were soulless machines of meat, the survival instinct would be all we needed to motivate us. The pleasures of the senses — such as taste and smell — are superfluous to machines in a godless world. Therefore, they are gifts to us, and evidence of divine grace. The older I’ve gotten, the more beauty, wonder and mystery I see in the world, which is why there are ever more of those three things in my books.

When asked what he finds appealing about his Catholicsim (to which he converted as an adult), Koontz told BeliefNet: "It gives me a sense that the world has shape and form and function and meaning. I suppose that's my favorite thing about it, because I don't wander aimlessly seeking for some meaning in things. I have a sense of what those meanings are. It opened my eyes to a deeper, more complex world, and that leaves you a lifetime of exploring to follow."

5) Odd never loses hope. In the midst of the conflict that ends the series, Odd remains confident that fighting against evil is not a hopeless task. Yes, "in this world, Evil works through countless surrogates. Its name is Legion." But that's only part of the story. "Good works through surrogates as well, and they are legion, too." Both Koontz and Odd believe that "life is amusing at even its darkest moments. With tragedy, there lie kernels of humor. No matter what's happening to you, there is light around the corner."

Even when the loss of Stormy, the love of his life, haunts Odd throughout the series, he knows that their story is not over. After all, they are destined to be together forever. That's one reason he does not fear death. If anything, he longs for the day when his work on earth will be done so he can be reunited with the love of his life.


Those who pass to the next life do not return. Not even the power of love, as intense a love as any a man had ever felt for a woman, could open a door in the barrier between Stormy and me. 'It won’t be long now,' I said softly.

Through the Odd Thomas series, Koontz has mesmerized millions of people with a story that takes God and the supernatural seriously; values honor, integrity, purity, and dare I say holiness; and points us toward the life to come in a way that shapes the life we live now. It's not the greatest story every told, but it most certainly points us toward it.