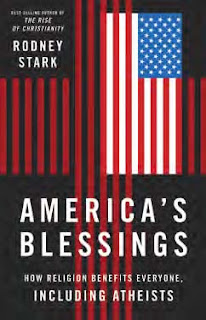 This book is not meant to be an apologetic for the Christian faith. It does not argue that Christianity is true. Mr. Stark merely makes a well-informed case that by multiple measures of what is popularly called ‘human flourishing,’ Christianity is the solution we’ve been looking for, not the problem we should be seeking to avoid.


This review will merely touch on a few of the topics into which Mr. Stark delved deeply. I do not cite all his sources in this post; if you have opportunity to read the book, you will see that he provides extensive footnotes from reliable studies to confirm his statements.

He notes that a “large body of solid research shows… a positive effect of religion on reducing crime, deviance, and delinquency—often a very strong effect.”   But if America is an exceptionally religious nation, why are our crime rates  higher than those of less religious nations? His answer: “They aren’t.”

After a fascinating section on how the Puritans in early America were not the repressed, uptight, sexually frustrated people so many think they were,  Mr. Stark offered some interesting states about the current state of sex lives in America.


THE INTELLECT AND THE ARTS

“They are far less likely to be handicapped by having police records. They are far more likely to display attractive personal characteristics such as niceness and generosity. They are less likely to come from broken homes, and more likely to have been raised to develop self-discipline and responsibility. They are far less prone to messy and expensive divorces, to premarital pregnancies, and extramarital scandals. They are less subject to depression and neurosis, both of which can devastate careers. They are healthier, hence less subject to absenteeism, and probably they are more energetic. They are more sociable and more apt to have and to form career-advancing relationships. In short, religiousness is not merely a matter of private belief or of spending an hour every week sitting in a pew. It is a comprehensive lifestyle that involves participation in extended social networks.”

Once again, this is not an argument that Christianity is true.  It is also not an argument that every person who claims to be religious (or irreligious) fits neatly into this template (as the statistics themselves make clear). Mr. Stark is simply showing that as a group, those who claim to be religious (specifically Christian) and consistently engage in what he calls "moral communities" flourish in ways that other groups apparently do not.

That's not the gospel, but it is good news.
Posted by Anthony at 3:32 PM