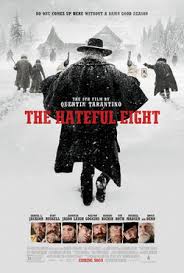 
I appreciate a story that honestly shows the impact of evil. In fact, I much prefer it to a story that glosses over the ripple effects that follows our actions.  There's a sense in which even his most violent forays function as an morality tale about both the characters in the movies and the response of an audience that either cringes or laughs when the worst of humanity is put on display.The fact that Tarantino can make a movie that elicits revulsion for heinous sins is no small feat in today's jaded world. I give him props for that.

My problem with Tarantino is that he doesn't know when to stop. It's one thing to expose evil; it's quite another to draw us into a vicarious participation. There is a scene in the movie that will probably define it. Samuel L. Jackson's character, Warren, seems initially to be the most sympathetic of the Hateful Eight. That's not saying a lot, but if I had to pick someone to cheer for, it was going to be him. About halfway through the movie, he gloatingly recounts the joyful killing of a man in a remarkably dehumanizing, degrading, tortuous acts of vengeance. He tells this to the man's father while the camera flips from their conversation to a reenactment of the act in question. It was a scene both numbing and terrible. In that moment, it becomes clear that he may be the worst of them all. Writing in The Atlantic ("The Hateful Eight Is a Gory Epic in Search of Meaning"), David Sims notes of that scene:


"Warren is handed the film’s worst moment, an absurdly long monologue about the violation and murder of an offscreen character, and just about manages to sell it even though it indulges all of Tarantino’s worst impulses to shock his audience with embarrassingly gross content."

It was also entirely unnecessary. Just recounting the incident would have been sufficient. But the reveling in it - groveling is probably a better word - breaks down the wall between observation and participation. It's one thing to remove a wall that separates us from being drawn into nobility, compassion, courage or any other admirable trait. It's quite another to remove the barriers between the viewers and the apocalypse on the screen.

Tarantino got on the map with Reservoir Dogs and  Pulp Fiction (both of which seem to have paved the way for Hateful Eight). In Pulp Fiction, Samuel L. Jackson played a hit man who finds a form of redemption. I don't know if this movie intends to make a statement with Jackson's character again, but it  ends on an entirely different note. There is no redemption. One of his last acts is to watch a woman strangle by hanging and note how that dance is his favorite one. By this point, nobody was cheering. If Dante had owned a 70mm camera and lived in Colorado, I think the Inferno would have looked something like this.

I walked away from Hateful Eight having absorbed a different message than Tarantino apparently intended. I didn't get the impression that the Civil War was the apocalypse. David Sims observed, "It's ultimate pitch is this: If you lock a bunch of angry, wounded, and evil creatures in a room, they’ll tear each other apart. The only mystery is to how it’s going to happen." Agreed. The apocalypse was not the war. It was the 'pitiless wasteland' in the hearts of the Hateful Eight. As one audience reviewer noted on Rotten Tomatoes, "These are awful people that say ugly things."I am reminded of Yeats' words in "The Second Coming":

There is an interesting conversation in the middle of the film about justice vs. frontier justice. The Hangman explains to a convict that when she gets to Red Rock, she will be hanged in front of a crowd in the town square by a dispassionate hangman. It's what civilized societies call justice. However, if the relatives of the person the convict killed were to hang her themselves in the midst of their thirst for revenge, that would be frontier justice.

The implication is that our striving after civilized justice doesn't matter as much as we think it does. Either way, she dies and somebody cheers. At best, there is a thin line between civilization and chaos. At worst, our moral delineations may just be a useful fiction, a prop holding up Bertrand Russell's scaffold of unyielding despair.

I appreciate that Tarantino is attempting to warn us of dangers of 'destroying every semblance of society'. I just wish it didn't feel like he was the one loosing the blood-dimmed tide.
Posted by Anthony at 5:54 AM