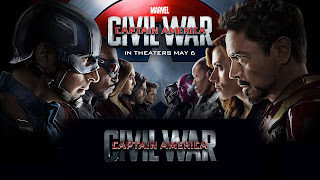 Captain America: Civil War, Marvel’s latest box office hit based on a comic series from 2006 and 2007, offers an important allegory for our post-911 times.*  It’s not a perfect movie – I’m still not sure why the Avengers were to blame for the explosion, and the villain's plot was preposterous – but the deeper issues are worth exploring.

The Avengers, a team of the most powerful people in the world, travel the globe to fight crime. They basically answer to no one. Unfortunately, in spite of all the good they do, there have been a number of missions that have failed very publicly (reminiscent of the starting premise in Batman v Superman). They are asked to sign the Sokovia Accords, which would put the group under United Nations supervision. When asked to describe them, Thaddeus Ross says,

“How about ‘dangerous’? What would you call a group of US based, enhanced individuals who routinely ignore sovereign borders and inflict their will wherever they choose and who, frankly, seem unconcerned with what they leave behind? New York, Washington D.C., Sokovia, Lagos...”

Peter Parker, when asked why he acts as Spider Man, notes, ”When you can do the things that I can, but you don't, and then the bad things happen? They happen because of you.” That’s not entirely true, but we get the point. With great power comes great responsibility.  But what if you do the things you can do and because of that bad things happen? King T’Chaka claims that “victory at the expense of the innocent is no victory at all.”  If he is correct, that's a problem, because that’s how victory has been won time and again. That may be inevitable in a messy world, but must it be so often, and involve so many?


That’s the dilemma Civil War addresses. Because of this moral quandary, the team must agree to come under the authority of the UN or be arrested. Captain America opposes this governmental intrusion; Iron Man thinks the pact is a necessary safeguard against the misuse of their power.

Their stances make sense. Captain America says, “I know we aren’t perfect, but the safest hands are our own.” He lives in the virtuous moral sweet spot of Aristotle's Golden Mean, and he is something of Kantian hero.  He trusts himself far more than the governmental institutions which have shown themselves to be deeply corrupt - and who can blame him? When Captain America speaks of theirs being the safest hands, he speaks from experience. Ross isn't being entirely forthcoming when he lists New York as one of the Avenger's failures. The World Council ordered a nuclear strike on New York - which Iron Man prevented.  In a moment of doubt, Cap is encouraged by a quote from his old flame:

Iron Man, on the other hand, has made bad choice after bad choice. He keeps thinking he knows the right path by which to achieve the greatest good (he’s the quintessential utilitarian in this Marvel universe), yet he keeps failing to achieve this. His failures have come back to haunt him. He wants someone else to make the call – and who can blame him? That’s a lot of guilt to carry around.  In encouraging the team to sign the accords, He believes he is “doing what has to be done, to save us from something worse.” But he’s always thought that's what he is doing, right? Why trust it will end well now? And frankly, Stark’s ego is still a factor. He thinks he’s the most capable guy in the room; if he is not smart enough to figure this out on his own, there's no way anyone else can.

The Vision offers an insightful observation that must be factored in by both sides. “Our very strength incites challenge. Challenge incites conflict. And conflict... breeds catastrophe.” In other words, simply because of the fact that they are so powerful, they draw the villainous to them. The greatest forces of good will be challenged by the greatest forces of evil. If they come under the umbrella of an international group like the UN, will this then deflect the violence and terrorism toward an organization better equipped to handle it both morally and militarily?

I don’t know if the filmmakers intended this, but it strikes me that the Avengers are the United States in today’s world. The US is strong; while it works with the UN, it does not bow to it. In the last twenty years the US has made some moves in the Middle East that have ended badly,
or at least have led to a far different outcome than was intended. However, let's say for the sake of argument that the safest hands are actually our own. That's not a guarantee that we have the ability to achieve the good that we desire, or that our understanding of the good is above reproach.

ox editor in chief Ezra Klein argues that it's impossible to see any other option than Iron Man's; Mark Millar, who wrote the main Civil War crossover series for Marvel, would have sided with Captain America. From the excellent Vox article "Marvel’s Civil War And Its Politics, Explained":

"Iron Man was unequivocally right in the argument over superhero registration. I'm not even sure what the case for the other side is, and the libertarians I've asked haven't been able to come up with one. If the state has any legitimate function at all, it's to train and regulate people who could accidentally kill everyone in a hundred-mile radius...

And Mark Millar…would have politically agreed with Iron Man, [but] he would have joined Captain America's side. "There's no way I'm working for the government, because the next thing I know I'm on a plane to Iraq and I'm going to be invading Syria on behalf of the American government, so no thank you."

I wish Civil War had been more war and less civil. That not because I am a fan of war. I just think the stakes did not seem high enough considering the subject matter. As a friend noted, “Somebody needed to die.” In the comics, somebody did. That would have added a tone that  matched the seriousness of the topic.

However, the moral dilemmas raised in the movie are important ones, and the fact that the film has left the tension hanging in the air between Cap and Stark has sparked a lively online discussion about war, liberty and security. That’s a good thing. Considering how terrorism is hitting increasingly close to home, this topic is not going away any time soon. Cap believes things don’t always have to end in violence, but Bucky’s probably right: “It always ends in a fight.”

Speaking of allegories for our times, a show I co-host called In Focus recently invited several guests to discuss the topic of "The Return of the Superhero In Popular Culture." If you are into comics, you may find this discussion interesting.
Posted by Anthony at 4:24 AM