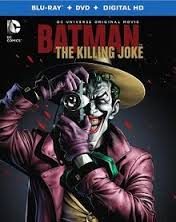 Frankly, the Batman portrayed in this movie is not that far away from proving the Joker’s thesis. This is a Batman who claims to have faced his darkest demons and remained intact, but The Killing Joke doesn’t really give us good reason to believe that’s true.  His interaction with Barbara Gordon – a part of the movie that fleshes out some of Alan Moore’s original story – sets up a knight who is more full of darkness than opposed to it.

I went to the theater with a friend who is a true comic aficionado (and who helps me on most of my comic book/superhero posts). When I asked his opinion of the movie, he sent me this:

The Killing Joke is notable for a couple of reasons. First, as you mentioned, the Joker's backstory / the Joker's bet.  Second, the treatment of Barbara Gordon. Batgirl is front and center in a long-running comic book debate know as ‘women in refrigerators’.  Women in refrigerators is a term used in Comic Book Fandom and, to a lesser extent, Science Fiction Fandom to describe a common trope where a woman is brutally murdered in order to progress the male protagonist's story line. The term is more broadly used to describe systemic violence against women in comics.  Alan Moore, the writer of the graphic novel, regrets writing the story and treating her the way he did.

I knew going in that they were going to add material that was supposed to strengthen her character. All I can conclude is that their attempts to make Batgirl a strong feminine character was an abject failure. They had her pining away for an emotionally distant man. (Movieweb describesher as “an enamored coed desperate for her hunky professor’s affections.”) A common criminal was able to goad her into making dumb mistakes. When things didn't go her way, she threw herself sexually at Batman. He doesn’t care about her; in fact, she describes as emotionless. He’s controlling, distant, and cold even after she seduces him. The Mary Sue does a good job of summarizing what I so disliked about that scene:

“Batman here is doing some vile pick up artist lines, undercutting Barbara to the point of destruction, emotionally wasting her, then physically overpowering her. Barbara reacts by kissing him. I didn’t expect it to be this bad but it is. [Batman] doesn’t emotionally react of course, he just lies there like … a piece of wood. Babs strips off her cowl and shirt as the camera pans to a maniacally grinning gargoyle. This scene is bad in so many ways.. It’s abusive toward her, both physically and mentally.”

She is reduced to trying to convince herself that it was just meaningless sex that was no big deal. He didn’t need convincing. He never apologizes, never empathizes, never tries to patch things up. As far as we can tell, she is simply a tool to help him in his vigilante vendetta. As a fan of Batgirl, I was appalled. Beyond being a fan, though, I wouldn't expect any self-respecting woman to act this way.

I was also bothered by Batman's reactions to her. In the comics she is often romantically connected with the first Robin.  This would be like dating your son's ex-girlfriend.  It was compounded by the fact that she is his best friend’s daughter.  It was such an uncomfortable scene to watch.”

This is not a fringe opinion. Indie Wire piles on: “The movie paints him as an emotionally-deadened jerk. Not only does he give into his baser instincts in an obviously inappropriate fashion, but the film never explains how and why he did it. Nor do they allow Batman to try to make it right or even openly discuss his sins with those he hurts. It makes his resolute demeanor in regard to saving the Joker all the more baffling, as he’s too good to kill a criminal who’s asking for it, but he’s not strong enough to pick up the phone when his lady friend is calling.”

I got the impression in The Killing Joke that everybody is just a tool to Batman, a means to his own ends – ends which started well but have devolved into obsession and increasing violence. As much as Batman claims to stand for law and order in the city, he is the first to break the law and disturb the order to accomplish his goals. This becomes obvious when the Joker asks Gordon what he would do to someone who broke the law. The Joker then goes on to describe himself  - but it’s clear to the viewer that he is also describing Batman. Gordon doesn’t see this until he says he says he would throw the book at him. He suddenly realizes that the very law that condemns the Joker condemns the Bat.

It appears that the Joker is right about Batman, at least in principle. Batman might not snap in a day, but he appears breakable over time. The final scene shows Batman and the Joker sharing a laugh over a (surprisingly) good joke. Roll credits. Really? After all that happened, they share a laugh as if all is well while Barbara adjusts to her paralysis,  Gordon recovers from torture, the Joker’s cruel minions roam free, and Gotham continues to implode.  I am reminded of a section Yeats’ poem “The Second Coming”:

In The Killing Joke, Batman shows an increasing lack of meaningful conviction while maintaining his passionate intensity. That’s a bad combination. It also sounds a lot like a description of the Joker.

There is an intriguing theory that The Killing Joke was meant to be the final Batman story, one in which Batman kills the Joker and in the process metaphorically 'kills' himself. Considering the mood the movie sets -and the worldview of Alan Moore - that seems plausible to me.

Moore once noted, "The truth of the world is that it is chaotic. The truth is, that it is not the Jewish banking conspiracy, or the grey aliens, or the twelve-foot reptiloids from another dimension that are in control, the truth is far more frightening; no-one is in control, the world is rudderless." In Watchmen, one of Moore's other works, there is revealing conversation between Rorschach and his psychologist. Rorschach says, “Existence is random. Has no pattern save what we imagine after staring at it for too long. No meaning save what we choose to impose.” His prison psychologist does not try to talk him out if that perspective: "The horror is this: in the end, it is simply a picture of empty meaningless Blackness.” Nihilism, a worldview Moore saw as complementary to a thoroughly scientific worldview, can be seen in most of Moore's heroes in Watchmen. In fact, "Watchmen develops its heroes precisely in order to ask us if we would not in fact be better off without heroes."

No wonder this story is dark. The Joker sees empty, meaningless blackness. Batman imposes meaning on a rudderless world he has stared at for too long. Therein lies the final meaning of The Killing Joke. It’s not just the Joker’s life that is falling into the abyss; it’s Batman’s too. And if the best of us can fall, it kills the hope in us all.
Posted by Anthony at 6:56 AM