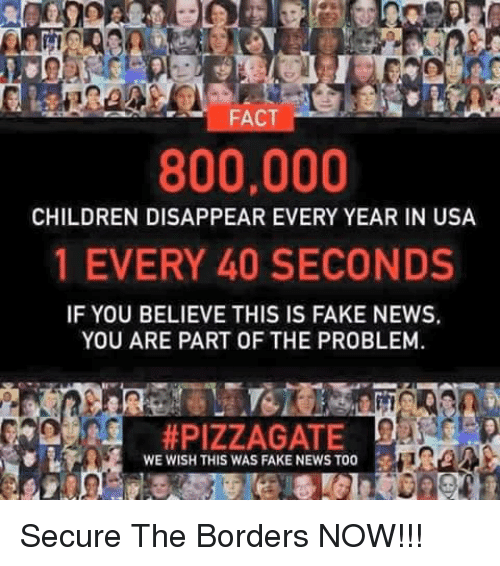 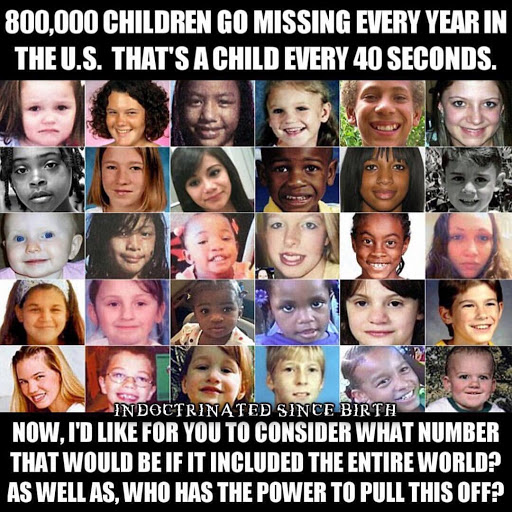 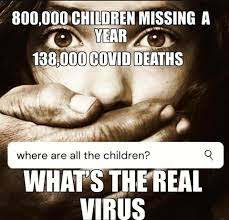 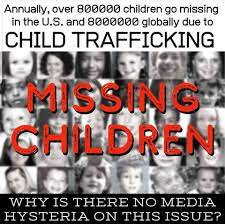 Note: these numbers will not include human beings who are trafficked into the United States from other countries (14,000-17,000 a year) for sex, labor, or both. That is a horrible statistic in itself, but it's not my focus. I am only focusing on what happens with kids who already live within the borders of the United States.

When children are reported missing to law enforcement, their names are entered into the FBI’s National Crime Information Center, or NCIC. If a child runs away multiple times in a year, for example, each instance is entered into NCIC separately and counted in the yearly total. If they are missing for an hour, it counts.

The total number of officially missing persons of any age in the United States in 2019 was 609, 275. According to the FBI, there were 421,394 NCIC entries for missing children.

That's still a lot. Fortunately, the National Incidence Studies of Missing, Abducted, Runaway and Thrownaway Children (NISMART) reported a 99.8 percent recovery rate for missing kids, which is slightly higher than the 99.3% I typically see cited elsewhere. This leaves us with 1,000 to 3,000 kids a year who are genuinely missing. Every one is one too many, to be sure, but it's worlds apart from 800,000 "disappearing."

The numbers of the missing, of course, accumulate over time. They didn't all go missing that year. This has happened over years. According to the FBI's National Crime Information Center (NCIC) Missing Person File, there were a total of 87,438 active missing person records as of December 31, 2019, of which minors accounted for 30,618.  This was an increase of approximately 1,500 minors from 2018, which seems consistent in light of the previous statistics.

The sexual exploitation of children is pervasive. This kind of story, and this one, and this one, all from 2020, are not as rare as they used to be.  Check out the stats from The Demand Project to see the trajectory in the United States of child pornography and the sexual abuse of children. As horrifying as those statistics are, much of this has to do with deviant individuals grooming innocent children rather than participating in what we generally think of when we think of trafficking. I want to stay focused on the issue of trafficking.

Jennifer Hansen, a Child Abuse Pediatrician at Children’s Mercy Hospital in Kansas City, offers this screening question to find out if kids have experienced sex trafficking: “Have you ever received anything of value, such as money, a place to stay, food, drugs, gifts or favors, in exchange for your performing a sexual activity?” If the answer is 'yes,' trafficking has occurred.

Hansen has a sobering and insightful presentation about what she has learned from the trafficked children she treats. There are a number of common risk factors found in sexually trafficked children, all of which are worth knowing. Two stand out to me.

2. History of child abuse (especially sexual abuse), neglect, or maltreatment may be the most important risk factors for sex trafficking. 70% to 95% of trafficked children suffered previous sexual abuse. The Bureau of Justice Statistics from 2000 show that of all reported victims of sexual assault, only 4% were strangers.  RAINN has reported that their calls have increased a lot during the COVID-19 crisis, with half of their calls coming from minors. Of those, " 67% identified their perpetrator as a family member and 79% said they were currently living with that perpetrator."

3. "According to the Centers for Disease Control, about one in four girls and one in 13 boys experience sexual abuse sometime in childhood – an alarmingly high number. A sizable minority of those abuses are committed by other children. The prevalence of children being sexually abused by adults is about one in nine girls and one in 53 boys, according to Rainn – a lower but still alarming number. By and large, the adults who sexually abuse children are not strangers or traffickers (or national Democratic politicians). Instead, they tend to be men – and overwhelmingly it is men who sexually abuse children – whom the abused child knows. Ninety-three per-cent of child molesters are known to their victims. fifty-nine per-cent are acquaintances or family friends, and 34% are family members. This reality does not lend itself to splashy headlines. It does not suggest a predator lurking in the shadows, let alone a dark network of nefarious liberals waiting to steal your children. It is less sensational, and it is also sadder. Acknowledging the real ways that children are sexually abused would mean confronting the ways that families and communities can keep dark secrets and enable harm to the most vulnerable. It would mean confronting the fact that for those it happens to, child sexual abuse is not only a matter of sexual violation but also of betrayal by someone they trusted."  - Moria Donegan, in The Guardian

An exact number of trafficked victims does not exist, in the same way that an exact number of flu cases don't exist. Comprehensive, comparable research (does "youth" stop at 18 or 24?) is lacking, which means a lot of the discussion involves a large degree of speculation, albeit informed speculation. As you will see from this list, as a result of a lack of continuity in organizations and studies, there is not a clear consensus about the extent of the trafficking problem.

So, as you can see, there are different numbers reported among official sources. I'm not sure how much they overlap, or how many of these reports should be added together, or how much is simply not seen.  I assume a little of both. After listening to a podcast by several reporters who spent hours interviewing people fighting sex trafficking talk about the irresponsible manner in which statistics on this issue are gathered in the first place, I think it's well worth considering the tenuous nature in which sex trafficking numberers are extrapolated rather than based on hard data. It's very possible, if not probable, that the global discussion  - including the stats from my opening paragraph is built on a flawed foundation that exaggerates a broken part of world that is bad enough without it being innflated.

However, we can still hit a bottom line: the reality that sex trafficking happens more than hard data shows is as certain as it is with any other criminal activity; at the same time,  the idea that the 800,000 missing youth  a) disappear in the United States and  b) are being trafficked is (fortunately) wildly misleading.

Every instance is a tragedy:1,000 to 2,000 missing kids a year minimum; thousands of youth in "survival sex" mode; 20,000 or more of God's image bearers under the age of 24 begrudgingly entering or being forced into prostitution; an uncertain but sobering number of children who have been abused in their own homes. That's bad. Let's not overlook it, but let's also not make the toll worse than it is.