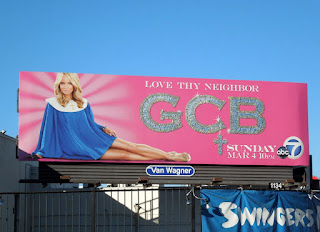 We'll never know, of course, because ABC would never air shows with these titles. (In ABC's "defense," they very cleverly dropped the book's original title and renamed the show "Good Christian Belles" before settling for the oh-so-compelling "GBC"). These alternate shows I listed would get neither sponsors nor airtime; if they did they would not get glowing reviews from Hollywood Life.

In fact, of all the reviews I read, very few reviewers were upset by the casual, almost indifferent obnoxious of the show.  The greatest crime was lack of compelling characters, the waste of good talent, or the tragedy of not having a show that would pick up the "Desperate Housewives" torch.  The distortion of ordinary Christian life was not a problem that even made the radar in any review I read - and I read a bunch.


I'm not actually very upset about this show.  It's no secret that Hollywood and religion are uneasy bedfellows. Most entertainment does not understand faith, let alone take it seriously enough to embed it realistically into the ordinary lives of characters and stories. I don't count on Hollywood to invigorate me spiritually. I long ago lowered the bar so far that I am pleasantly surprised when I find a show or a movie that takes religion seriously - and there are at least a few (and I don't mean Left Behind).

On the other hand, I have talked to enough people to know that the Christian stereotypes captured by entertainment have an impact. It hard to have a productive conversation with people whose best analysis of the faith comes from Dogma or Easy A - and now this.


Here's the thing: we don't worship the Bible. We don't worship the church. We don't worship morality.  We worship Christ, and even when He is insulted, we eventually relax because we believe truth will win in the end. Christians will not resort to bombing as we respond to the belittling and mischaracterization of our faith. I grow weary of the constant reference to Christian terrorists (“Radical Christianity is just as dangerous as radical Islam”) and Christian Sharia law.  The Bible could not be more plain: our biggest conflicts are not physical, but spiritual (see here for Jesus' words; here for Paul's).

The battle lines are drawn in our souls, not in our streets.  Jesus made it clear that I am to think of those with whom I disagree as my neighbors, not my enemies.  We all bear His image, even if we go out of our way to diminish or distort it.

ABC is welcome to air its adaptation of Good Christian B****.  We who are seeking to represent Christ in the world should see this as an opportunity to prove ABC wrong.  If we can't, the problem is ours, not theirs.
Posted by Anthony at 6:24 AM