Two of the most popular current television shows are also two of the most grim:  "Breaking Bad" and "The Walking Dead."  If you want to go for a trifecta, throw in "Game of Thrones," which is not yet as grim as it’s going to be.  Trust me.

For the record, I love "The Walking Dead," like "Breaking Bad," and was slightly bothered by how quickly and thoroughly Martin's "Game" drew me in.  The ideas of brilliant (and slightly disturbed?) minds have been captured and communicated by people with amazing talent.  If there is a Golden Age of TV drama, perhaps this is it.

I am also intrigued by the popularity of these shows.  While they leave something to be desired (I’ll get to that at the end), they all borrow heavily from a surprisingly Christian view of the world.

"Walking Dead" clearly paints the dissolution of humanity as a bad thing, not a good thing.  Even among the survivors, individual human lives are of utmost importance. In the midst of the hysterical decrying of the very existence of people, it's nice to be reminded that we are not the plague. 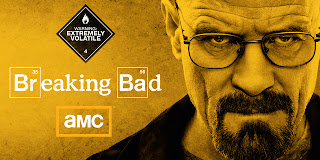 "Breaking Bad" painstakingly chronicles the impact of the main character’s decisions on the lives of all those around him.  We care about Walter White’s wife and son, because they matter. When the son of two meth-addicted parents is rescued, we cheer. Even when characters are killed we cringe, because we know that not only has something bad happened to the victim, something dehumanizing is happening inside the killer too.

Christianity has always elevated the value of human life; we are created in the image of God, and as such carry intrinsic worth.  In a world that struggles to understand what it means to be human, these shows offer a refreshing perspective: people matter.

2) They give brutally harsh portrayals of the consequences of sin, even sin committed with the best of intent.

A person’s actions either make them or break them, if not immediately then eventually. "Breaking Bad" shows a hero who becomes a monster, slowly and freely choosing to become evil.  What happens?  As Shakespeare once wrote, “ Chaos has come again.”  The camera refuses to look away as Walter sows and reaps.

"Walking Dead" shows the downward spiral of individual characters giving in to the temptations of the moment and gradually losing their souls in the process.  There may be monsters out there, but what about the monsters inside?  What if the sickness really is myself?

One cannot read the Bible without seeing a world of consequences; yes, God offers forgiveness and grace, but we still reap the things we sow. In a world where so many comedies and realities gloss over the real world impact of our choices, these shows unflinchingly display the fallout.

The extinction event in "The Walking Dead" is clearly not a boon for the world. The collapse of civilization is not a blessing.  The life of a solitary wanderer is a life to be mourned, not embraced.  Solidarity is safety; camaraderie is life.  In a world where technology allows us increasingly to isolate ourselves at the expense of true community, the reminder that the people around us need to be embraced is an important one.

In "Breaking Bad," the value of community is perhaps best seen in the tragedy of conflict.  The longer Walter White “breaks bad,” the more we see the horrific impact as everybody around him begins breaking as well.  We cheer him not when he heads off into the desert, but when he eats supper with his family.  The fact that his secret life requires him to be hardened, deceitful, and distant reminds us that honesty, integrity and companionship make the world go 'round.

The Bible presents a world in which people are meant to live together in unity and self-sacrifice. Sure, the rugged individual gets all the press,  but it's not the way life is meant to be lived.

4) They long for a better world.

With this longing comes the idea that things are not as they should be, but a solution exists.  To borrow from C.S. Lewis’s language, they know what crooked is, and even if they don’t yet see the straight, they long for it.

The zombies in "The Walking Dead" are not right; they are human, but they aren’t.  There is a search for a cure to bring health back to the sick; there is a desire to rebuild communities; there is a longing for a world with trust, peace, hope, children and families.

"Breaking Bad" attempts to draw very clear lines between the good and bad actions of all the characters.  Everyone has insight into what ought to be done in certain situations, even if they only consistently uphold that standard for others. Perhaps it is true that our moral compass is best shown in our reactions to others even more than our deliberate actions.

Christianity claims that there are objective ways of understanding good and evil, and we are all called to fight to overcome evil with good. In a world that so often refuses to take a stand on morality, these shows are not afraid to claim not only that evil is real, but also that we must agree to fight against it.

5) They look unflinchingly at the capacity for both evil and good in everyone.

The stories draw us viewers in because we sense that something meaningful, important, and deep is happening.  Within each character, a war is raging between selfishness, pride, greed and power or selflessness, humility, generosity and servanthood.  All the characters have situations that challenge them, and even their smallest victories or compromises matter.

We will all one day be held accountable for what we did with the choices we have been given.  I believe it was Lewis who once said we don’t interact with just people, but with beings who will one day either stun us with angelic glory or horrify us with demonic ugliness. In this life, we catch glimpses in ourselves and in others.  In these shows, we watch the trajectories of everyone unfold.

John Stonestreet talks about entertainment being good, true and noble: good, in that the quality is high; true, in that its portrayal of the world matches up with reality; and noble, in that it inspires us to be better people. In many ways, these shows meet the criteria.

Here’s the problem:  none of them offer hope.  Sure, particular situations end well - occasionally.  But the pot at the end of the rainbow is not filled with gold.  The characters are forced to create their own meaning in a meaningless world; to find their own kind of hope when there is none; to rage agains the dying of the light while not actually believing there will be any end other than darkness. (This isn't limited to TV shows, of course. I'm also thinking of films like The American, Hannah, The Grey, Sucker Punch, and No Country for Old Men).

These movies and shows may all be good and noble. But without hope, the truth about reality is incomplete, so…it’s really not true.  And a partial truth is a lie.

I am starting to think "Breaking Bad" and "The Walking Dead" move me because I bring to them a hope and a belief in redemption that is not actually in the story.  If I  step outside of my Christian presupposition about the world - through Christ, all can be made well -  the shows strike me as mesmerizing nihilism. (UPDATE:"Better Angels" on 3/11/12 seems to confirm this even more.)

If that is true, what does the popularity of these shows say about our culture?  Do they make us feel better?  I don’t think so.  Do they remind us of the really important things in life?  Well, yes, but to what purpose?   These shows have a lot of brilliantly packaged sound and fury -  without hope, do they also signify nothing?  Walter White is Macbeth, but there is nobody to clean up the kingdom when he’s gone.  Rick Grimes is as nobly doomed as Eddard Stark, except humanity’s winter has now arrived, and there will be no summer. 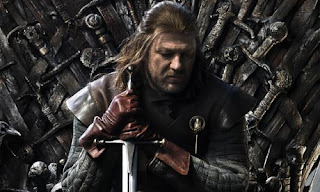 George R.R. Martin is a stunningly good writer, and his characters and his worlds move me.  But the relentless, brooding fatalism of the 7 Kindgoms is offset only by individual stories, lives occasionally lived well in the midst of a universe and a kingdom that simply do not care and are not fair. "Game of Thrones" will break new ground, I think, in its beautiful presentation of despair.  It has at least 4 more seasons ahead of it, and the road to darkness has been largely paved already.
Posted by Anthony at 6:51 PM