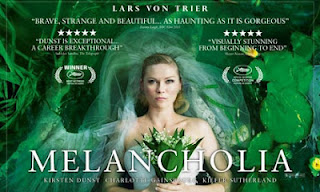 In the valley of the melancholy, the detached, uncaring man is king.  And so the world ends with a bang, validating Bertrand Russell's perspective:


That Man is the product of causes which had no prevision of the end they were achieving; that his origin, his growth, his hopes and fears, his loves and his beliefs, are but the outcome of accidental collocations of atoms; that no fire, no heroism, no intensity of thought and feeling, can preserve an individual life beyond the grave; that all the labours of the ages, all the devotion, all the inspiration, all the noonday brightness of human genius, are destined to extinction in the vast death of the solar system, and that the whole temple of Man's achievement must inevitably be buried beneath the debris of a universe in ruins--all these things, if not quite beyond dispute, are yet so nearly certain, that no philosophy which rejects them can hope to stand. Only within the scaffolding of these truths, only on the firm foundation of unyielding despair, can the soul's habitation henceforth be safely built.

There is a sense in which I understand the appeal of films like Melancholia.  There is a gravitas, a weight to the truth that the world is not always happy, and that not every story ends well.  To not acknowledge that is to avoid reality.  But a view that believes the unrelenting weight of truth will eventually crush us fails to tell the whole story.

Here is where Christianity brings a robust picture of truth. The weight of truth can also be a counterweight that raises us to realms of hope and light. There are some kinds of truth that also set us free.  Not every ritual is empty; not every relationship is destructive; not every hope has been obliterated in the cold light of a hostile universe; not every story ends in despair.

If Bertrand Russell,  Cormac McCarthy, Stephen Hawking, and Lars Von Trier are correct, then we truly are hollow people in an hollow world. But if God is present, infusing truth with a nobility and purpose that transcends our fragile existence, then the story changes completely.

"I lift up my eyes to the mountains—  where does my help come from?  My help comes from the LORD,  the Maker of heaven and earth."  Psalm 121:1-2